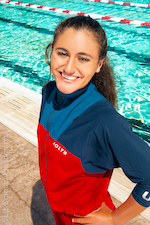 2019 bronze medalist at the Pan American Games in team… On the senior national team since 2018… Competed at the 2019 FINA World Championships… Swam at the 2016 COMEN Cup.

2020: Swam at the French Open, the first and only stop of the world series for the season…Won silver in technical team… Would have won another silver in free team but the nation was disqualified after a clerical error… Announced her retirement from elite in June.

2019: Won a bronze medal in team at the Pan American Games… Placed 11th in technical team at the World Championships, and served as alternate to the free team… Also competed at the Synchro America Open and the Spanish Open in both team events.

Click here for all coverage related to Emmanuella Tchakmakjian.