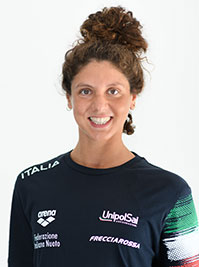 2018:  Earned a medal in all seven events she was entered in at the European Championships for a total of two silver and five bronze…Beat Ukraine in the free solo event for the first time in nine years…Competed extensively in the solo and duet events in the FINA World Series Circuit throughout the season.

2017: Competed at the FINA World Championships where she placed sixth in all solo and duet events, fifth in technical and free team, and fourth in combo…Won two gold at the European Cup in the team events, and silver in the duet events.

2016: Placed fifth at the Olympic Games in team and sixth in duet…Won silver in free team, and bronze in free solo, technical solo, free duet, technical duet, combo and technical team at the European Championships.

Click here for all coverage related to Linda Cerruti.