Every routine lasts between two and almost five minutes, and the times are different with each age category.

There is an allowance of fifteen seconds less or plus allotted time for all these routines.

The walk-on and deckwork time is not included in the times listed above, but it should not exceed 30 seconds.

Synchro swimmers put Knox gelatin in their hair for competition to keep it place while swimming.

Heavy makeup is also applied before competition so the judges can easily see facial expressions and emotions from far away. 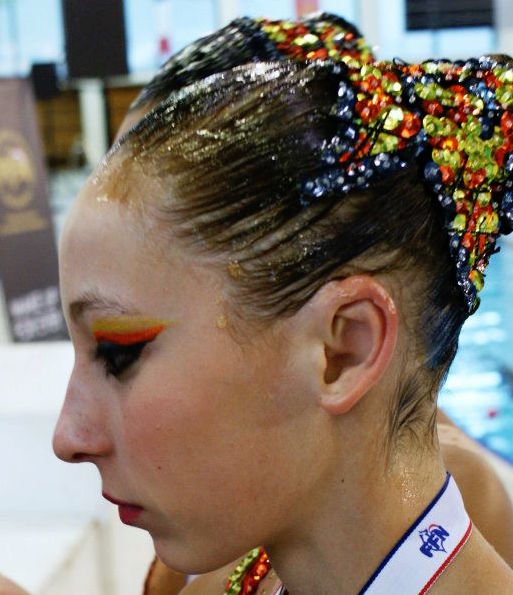 Synchronized swimming is a grueling sport, but it is also a very aesthetic and glamorous one. A lot of time and effort is spent in creating and sewing the competition suits of each swimmer to match the music and mood of the routine. A headpiece that matches the suit is also created and set in the swimmer’s hair.

Synchronized swimmers use underwater speakers in order to hear the music while underwater.

In the beginning of the creation process, the music is counted usually in eights (5,6,7,8,…1,2,3,4,5,6,7,8…), and each move or position is set on a particular count. This counting ensures synchronization between each swimmer. The routine will be rehearsed over and over until muscle memory takes over and counting becomes trivial.

In the age groups 12 and under and 13-15, the competitors must perform figures as part of their competition. The total figure score of the team is then compiled in the final routine score to determine the final rankings. Please refer to the ‘Figure’ page for more information.

With the new code of point unveiled at the end of the 2017 season, the junior (16-18) swimmers now also have technical routines. However, it is up to each organizing committee if figures are included as well. Both are possible, but figures will not count anymore towards the final routine score and thus the final rankings.

In the senior category (18 and older), figures are replaced by a technical routine. Like a free routine, it is swam to music but has mandatory technical elements that must be executed in a particular order and all synchronized. The technical elements vary in function of the routine (i.e solo vs. duet). For a detailed listing of the elements, please refer to the routine category of your choice in the ‘Routine Requirement’ menu.

In international competitions, each nation is only allowed one entry in each event. That means Russia cannot enter three soloists and sweep the podium if they wanted to. Figures are mandatory for each swimmer in the 12 and Under and 13-15 categories.

Each major national and international competition usually involves a preliminary round and a final round. The top 12 routines from preliminaries move on to the finals, and the 13th routine serves as a pre-swimmer.

A pre-swimmer swims first in the final but is not ranked. It allows the judges to “warm-up” and make sure they are all on the same page. If their scores range too widely after the pre-swimmer routine is done, the judges must reconvene and discuss. For the swimmers, being a pre-swimmer allows them to show off their hard work one last time without the pressure of being ranked and trying to place.

Unfortunately, the synchro world has not yet figured out a way to streamline all its major competitions. It certainly is a struggle to gain traction and more fans.

The European and World Championships have now adopted the same format in that technical routines are 100% separate from free routines, and have their own preliminary and final rounds. At the Olympic Games, the technical routine will only be swam once, while the free routine will have a preliminary and final round. Then, the technical and free scores will be combined to determine the final placement.

The Asian Games’ format changes, depending on the mood of… who knows. The 2018 edition of that meet had the exact same format as the Olympics (duet and team only, with scores combined). In 2014, it also included free combination.

At the smaller levels, like at the Opens and the FINA world series meet, we are faced most often with the same format as the world and European Championships, where technical and free routines are completely separated (this wasn’t always the case in 2017; but it has been changed and streamlined in 2018). These world series meets also include all 10 events that we find the world championships.

Numerous men have been part of the sport for decades. While they are not allowed to compete at the Olympic Games as of 2016, the rules have started to change for them. The 2015 World Championships where the first FINA-sanctioned competition that allowed men to compete in mixed technical and free duets.

Legendary American swimmer Bill May won the very first World title in Kazan in the technical duet with Christina Jones, and also grabbed the silver medal in the mixed free duet with longtime partner Kristina Lum. May has swam in national and small international meets since the early 1990s and is a performer for Cirque du Soleil’s O.

In 2016, the European Championships followed the lead and also opened up their competition to mixed duets. Russian Aleksandr Maltsev won both the free and technical duets.

Fans are now hopeful that men’s participation in the sport will grow, and that we might finally see them allowed to compete at the Games.

Except for a few exceptions, synchronized swimming is not a professional sport and it is very hard for athletes to make a living out of it.

It is common for some of the best swimmers who aren’t quite done with the sport to continue a career in the entertainment industry. Many former Olympians and national team members are casts of Cirque du Soleil’s O or Le Reve, or are members of show troups like the Aqualillies or the Water Beauties.

Many retired swimmers also take time to give back to the sport by coaching teams or choreographing for different clubs all around the world.