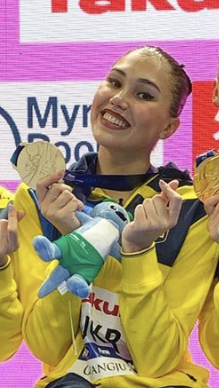 Three-time World champion… Member of the highlight routine that won the nation’s first ever World title in 2019… Five-time World medalist overall… Six-time European champion, and European silver medalist in 2018… Competed at the 2019 and 2022 FINA World Championships, and the 2021 and 2022 European Championships… Won two bronze medals (team, combo) at the 2015 European Games… Member of the junior national team from 2015-2017.

2021: Selected as reserve for the Olympic team… Became European champion in free combination and highlight at the European Championships… Served as reserve to the technical and free team routines there.

2020: Did not compete with the team at the French Open…Was given a four-months suspension after testing positive for furosemide… Gryshko’s sanctioning period officially began on December 23rd, 2019 until April 24th, 2020.

2019: Won Ukraine’s first-ever world title in the highlight event at the FINA World Championships in Gwangju… Also won a bronze in the free combination there…Competed at the Barcelona FINA World Series and the Super Final in Budapest…Served as alternate to the technical and free team routines most of the season.

2018: Won silver at the European Championships in free team… Competed in that event and the highlight throughout the year…Served as alternate for the technical team and combo the whole season… Competed in three world series – Budapest Open, Canada Open and Synchro America Open.

Click here for all coverage related to Veronika Gryshko.