U.S. Starts Season With a Bang at Synchro America Open

The Synchro America Open, sixth meet of the FINA World Series, was highlighted by the highly anticipated season debuts of the U.S. team, which presented five new choreographies, including four from new coaches Andrea Fuentes and Reem Abdalazem.

The ‘Robot’ free team routine was certainly the one everybody was buzzing about on social media, as Fuentes and the American federation had built its reveal up until the very last moment. It did not disappoint.

The Americans looked poised and confident as they arrived on deck, and essentially stared into your soul with their blank Robot eyes as they waited for the music to start, making it difficult to look away. The theme is a tricky one to tackle, but the choreography was very interesting and audacious, filled with unexpected movements, intricate artistic research and surprising changes of pace. 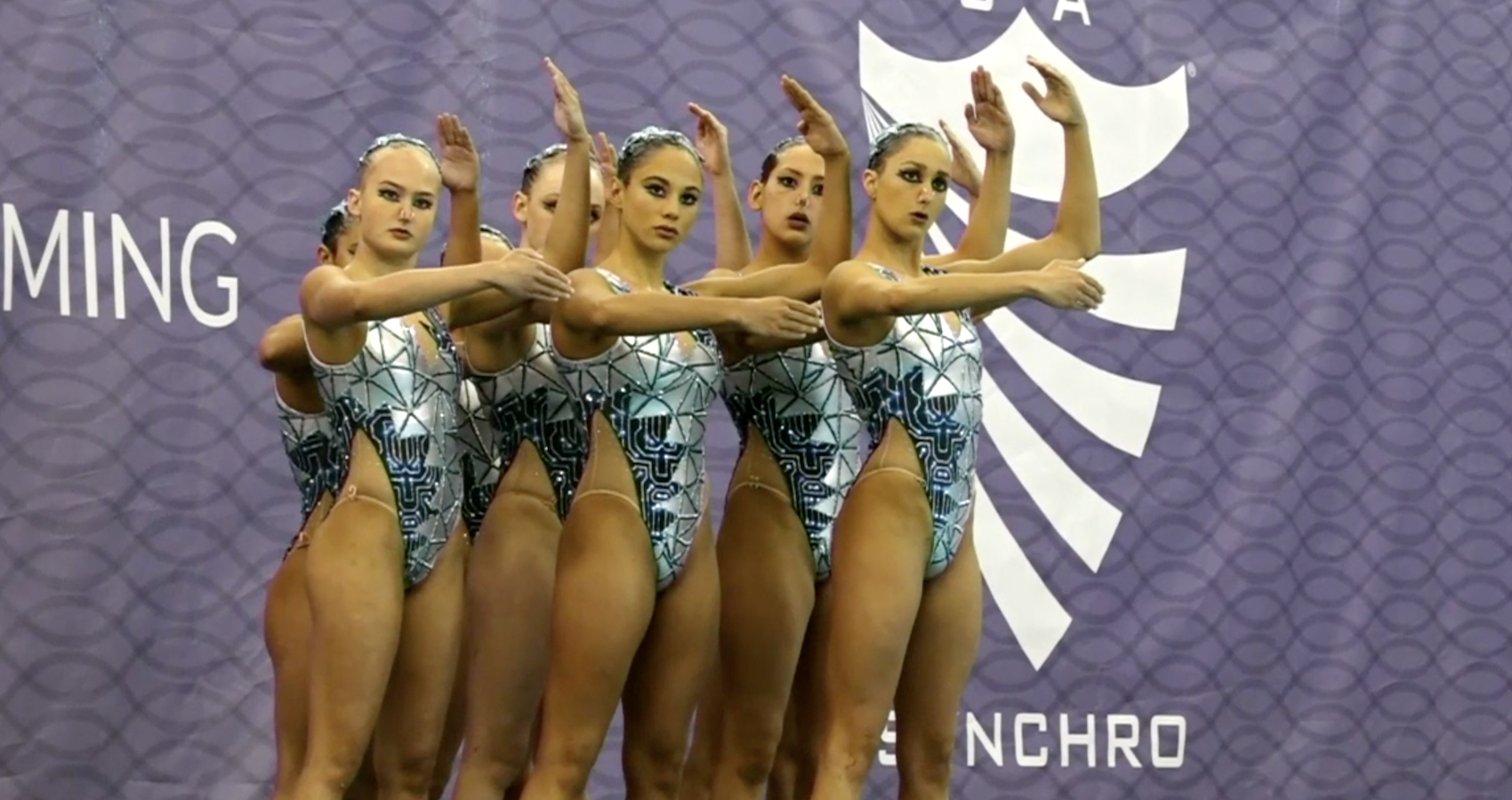 With the focus nowadays being put towards speed, execution and high acrobatics to match the Soviet-style of swimming as it is indeed what is more likely to be rewarded in the end, it was refreshing to see a daring choreography and an emphasis on musicality and attention to detail. We did not necessarily realize the sport needed more of this, but it did.

With the sense of urgency to try to qualify for Tokyo, Fuentes took a bet on making a strong artistic impression, and she succeeded as her team scored a huge 87.9333, which is a nearly a six points improvement since last season and a score that could bring them closer to the likes of Mexico, France and Greece for a qualification spot.

The technical team was a bit more conventional in its choreography, although the team also made a strong impression right from the start with an aggressive deckwork. Anita Alvarez was subbed out at the last minute, so there were a few kinks to be worked out, but the routine scored a 85.5973, about two points higher than some of its best scores last year and another quad-best score for the nation.

In the duet event, Alvarez was paired with Ruby Remati for the technical portion. The two had already swam together last season already, and they presented here a new routine set to “It’s Oh So Quiet” song from Bjork. The choreography is lovely for a duet and well constructed, but it is honestly difficult to not think of Virginie Dedieu’s iconic 2005 free solo when hearing this music. Despite a major mistake after the third element where Remati got a bit lost in her direction — and she was not the only one to do so at this competition, the two had a satisfying first swim of the season for a score of 85.8815, about two and a half point better than one year ago at the 2018 Synchro America Open.

The free duet, which was also highly anticipated as it was set to a mix of R&B music, was swam by Alvarez and Lindi Schroeder. Just like with the other routines, the two grabbed one’s attention right from the walk-in, and the choreography was audacious once more. The two earned 86.0083, yet again one of the best scores of this quad for the Americans.

Overall across all four routines, the content for the U.S. team is mostly there but the squad certainly can improve on execution, precision in patterns, and on its highlights and acrobatics. It was just great to finally this much talked-about squad and get this season rolling. Clearly the changes that Fuentes and Abdalazem have made in essentially seven months with their young team are already undeniable.

Bill May and Natalia Vega also made their first outing of the year in the technical mixed duet event with a new and fun choreography to music from 2NE1, a very popular South Korean band, which should help them get the crowd’s support at worlds. The two go quite well together and had a good first swim, although the element scores displayed wide ranges (8.0 to 9.1 in some instances), for a final score of 87.6687. This is a great starting score for them, but we have seen Japanese mixed pair in big progress this year already, scoring in the 85-88 range, so the battle for the bronze medal in Gwangju could be very interesting.

Japan was actually in Greensboro with its top squad and entered all events except the mixed duets and the highlight. The country was the heavy favorite to sweep all seven gold medals, which it easily it with clean, sharp and mastered routines, as we have come to expect from the country.

Canada was only entered in the solo and duet events, and earned all four silver medals there. Jacqueline Simoneau and Claudia Holzner had probably one of their best swims yet in technical duet, and nearly tied their best score in that event with a 88.6425. In the technical solo event, Simoneau was another victim of a loss of direction in the pool and did her first element facing perpendicular to the judges instead of parallel, which resulted in an automatic 0.5 penalty. She did however get some redemption in free solo where she received a 90.5083, her best score yet this year with her new choreography to Queen’s “Somebody to Love.”

A lot of the other nations in attendance were clearly all gearing up for the Pan American Games set for late July, as we saw routines from Argentina, Colombia, Peru and El Salvador. It was also the first time for El Salvador and Peru to compete in the ASWS circuit. It was actually quite nice to see these two nations out as we rarely get to see them outside of the more local, albeit international, competitions like the Pan American Championships, the Bolivarian Games or the South American Championships which don’t have the best video coverage.

Aside from the duet event, Colombia‘s Monica Arango competed in the technical solo for the first time this season and won bronze with 79.0542. Her routine was particularly captivating as she swam to the French song “Quand c’est?” from Stromae that tackles the topic of cancer. It was also neat to see Argentina‘s Trinidad Lopez Brasesco in solo for the first time on the international stage in the technical event. We’ve been accustomed of seeing her duet partner Camila Arregui for the last few years, who did swim here in the free solo also for the first time this season. Lopez Brasesco fared well in tech and scored 72.8870, while Arregui recorded 76.3000 for her Abba’s ‘The Winner Takes it All’ free routine.

The duet of Debbie Soh and Miya Young from Singapore continued its slow but steady rise and recorded here its two career-best scores of 78.2622 in tech and 77.5333 in free. And for a fun little fact thanks to Singapore’s swimming federation, this is the first time ever that a duet from southeast Asia passes the 78 mark in a major international competition!

Hungary was back out for the first time since the third leg of the ASWS in Russia in all the events but solos and mixed duets. The Hungarians won gold in highlight with its fun ‘Spy Agent’ routine,  and silver in free combination.

The only other international mixed duet of the competition was Kazakhstan‘s Aigerim Issayeva and Olzhas Makhanbetiyarov, which only competed in the tech event. The latter also got lost (seriously, what was up with this pool?), walked out the wrong way after the last element, bumped into his duet partner, and as a result stayed underwater instead of doing the entire last hybrid.

Of note, there were only four judges per panel instead of the usual five, which is a bit odd, so we should keep that in mind when looking at the scores averages and comparing them to other meets.