While we mourn the end of the 2016 Olympics and recover like the couch-athletes that we are, I felt like I could discuss the synchro competitions in a little more depth now that it’s behind us…And until we learn about who is retiring or taking a break from the sport and then we will be back to mourning.

Let’s start the conversation by talking about the Queens. Team Russia blew all of our minds away by scoring a gigantic 99.1333 in their free routine. A 99+. Out of a 100. Multiple 10s from judges. At the Olympics. This was unseen since the new scoring system had been put in place. Is it ever going to get better than this? That routine is pretty incredible and probably actually deserves a score of a 150 out of 100 with 30 bonus points for badassery and 20 points for a “I want your suit it’s so pretty” reaction, but I am not the one who makes the rules here.

If you haven’t seen that routine yet, what is your life? I don’t want to hear that you’ve been at work. Get out from under your rock and enjoy it with the other 5.6 MILLIONS viewers (and counting) on Facebook.

I have watched this literally five times a day ever since. It is so clean, so fast, so precise, and so freaking hard. Yet they make it look like a walk in the park. What really puts them above and beyond is the intricacy of their hybrids, the crazy pattern changes while doing them, and the fact that they do a lot of these hybrids with all eight swimmers synchronized. That sounds pretty obvious, but if you look at China or Japan and focus on that, you will notice that they barely do any hybrids with all eight swimmers together. And the Russians do all of that really, really well. The final results say it all: it wasn’t even close. 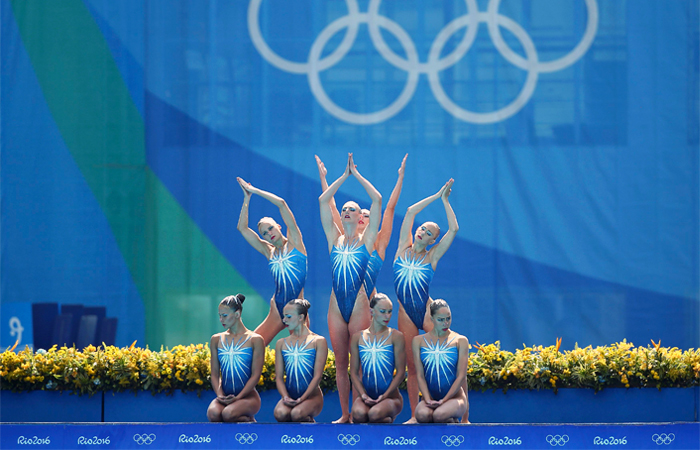 Russia has won every single Olympic gold since 2000. This year, they showed no signs of stopping their domination anytime soon. What Russia has on its side, other than crazy talented swimmers and absolutely brilliant coaches, is depth. In every age-group category, they dominate. They are never scrambling to field a full team. We saw the best nine swimmers here in Rio, but remember there are hundreds behind them that may never even make it to the senior team yet would be the star swimmers in any other country.

Russia’s dominance kind of happened all of the sudden yet didn’t happen overnight. The 1996 Atlanta Olympics were the first where the team event was included in the synchro schedule. There, they finished fourth and that was essentially the one and only time Russia was left out of the international podiums. Being so dominant takes a lot of work. It’s a whole school of training that is fully supported by the federation and the government.

The national team trains at Round Lake (‘Ozero Krugloye’) about 20 miles north of Moscow. Round Lake is on a plot of about 96,000 square meters and surrounded by a woodland park. It serves as a training base for the swimming, fencing and gymnastics national teams. The facility is absolutely top-notch, and of course provides ideal conditions for training, resting, recovering, nutrition and therapy. It’s hard to match this combination of top training facilities, state funding, and choreography experience from the Russian ballet tradition. 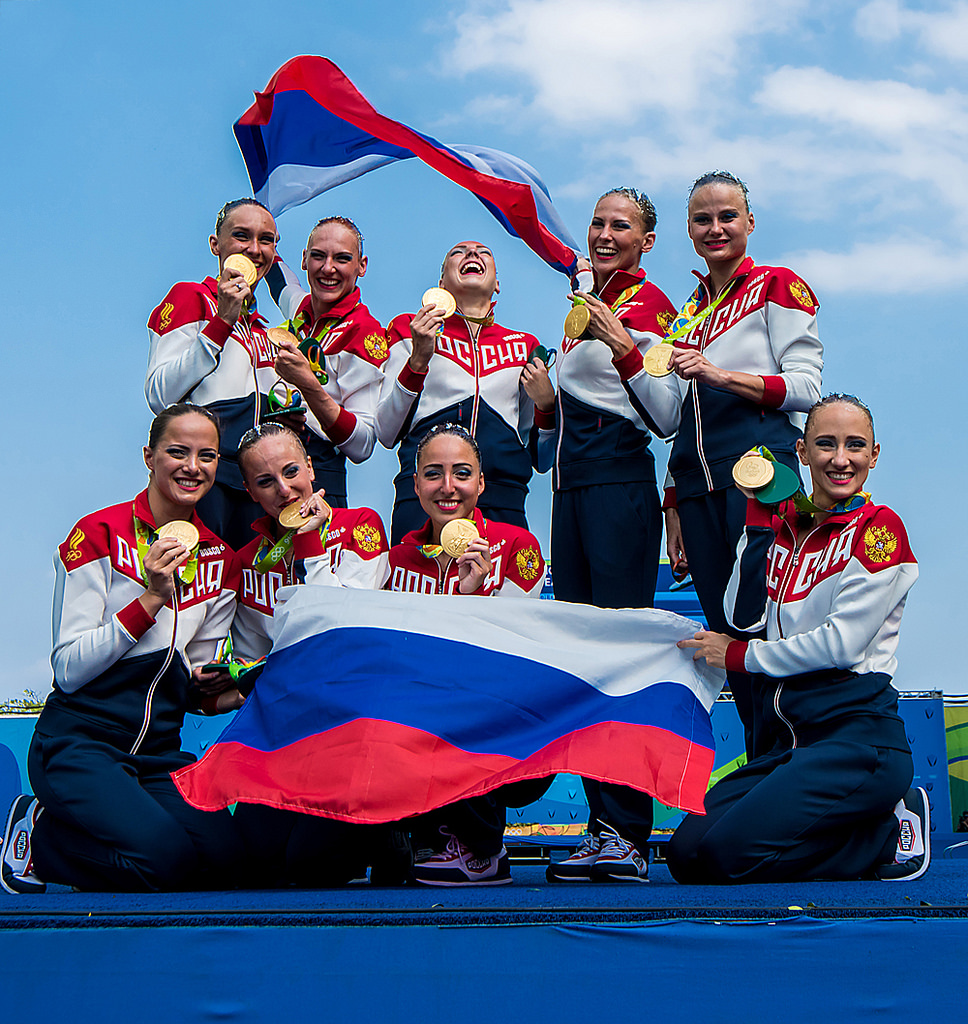 On top of that, Russian swimmers can become professional athletes and live off of this sport unlike the other 85%  synchro swimmers in other countries. And if you can reach the top of the sport and become an Olympian, you will be rewarded. In 2016, an Olympic gold medal was worth 4 million RUB — which is the equivalent of about $62,000. They will also likely get a life’s pension from the government, and other nice gifts like luxury cars and sponsorships as we have seen in previous Olympics. Of course any athlete will tell you that this is not why they are here, that they don’t think about the money. All I’m saying is, it’s a nice little perk alongside being able to swim on the biggest stage of your sport and represent your country.

With all these incentives, it’s quite easy to see why it becomes attractive to be an athlete in Russia. They have the means and the funding to be in a fantastic training facility, to work with incredible and innovative coaches, and their depth is so impressive that just this internal competition makes every single team better year after year. Each swimmer knows her spot isn’t set in stone (well… maybe Natalia Ischenko and Svetlana Romashina can rest a little better), so it pushes each and every one of them to be better and train harder to keep that spot.

This article turned out to be basically a big tribute to the Russian program and its success. I had to find a way to express my admiration for their dominance and this dynasty that they have created in this sport. Every country aims to even catch up to them, but they are always one step ahead. 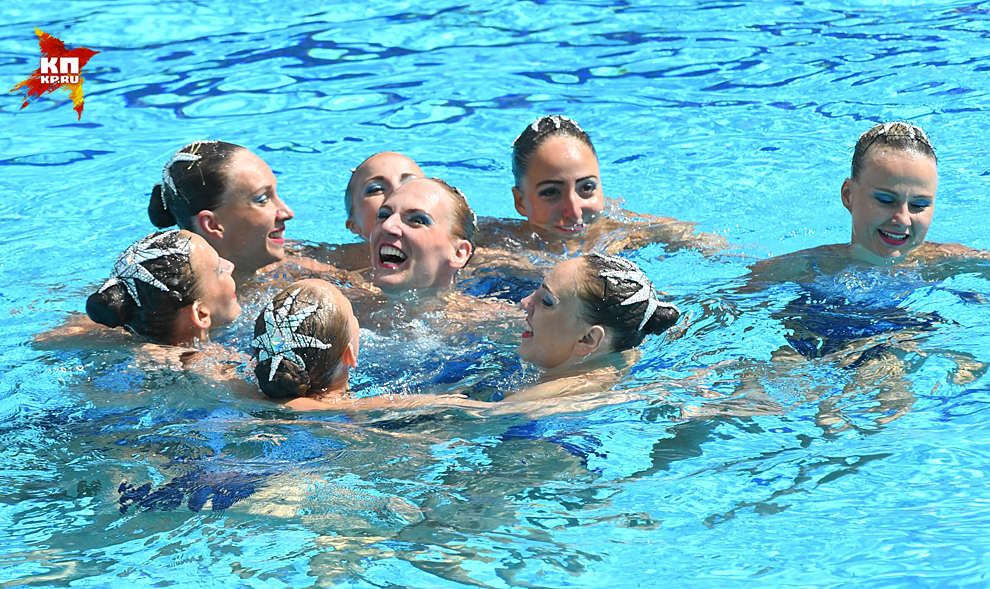 This team was a lot of fun to watch this year and I have no doubt the Russians will continue to dominate for many more years. Ischenko and Romashina are now the most decorated swimmers ever with five Olympic golds and tied with former teammate Anastasia Davydova. Part of me hopes they will continue and break that record, but nothing has been announced yet on their part.

It will be interesting to see how the roster evolves and who shows up at 2017 Worlds in Budapest, Hungary next summer. The one thing I am sure of is that they will not disappoint. In the meantime, enjoy their wonderful technical routine from Rio where, yet again, there is nothing more to say.