Catching up with Christina Jones

Christina Jones was one of the duet partners of Bill May during the inaugural mixed duet event at the 2015 FINA World Championships in Kazan, Russia. Jones and May earned a gold medal in the technical duet category and the first ever world title in the mixed duet. Two years later, we caught up with Jones to talk about her experience in Kazan, what she’s been up to since, and her thoughts on the evolution of the mixed duet event.

Jones was a main component of the U.S. national team from 2006 to 2008. She competed at the 2005 and 2007 FINA World Championships in the solo, duet (only in 2007) and team events. She went on to compete in the 2008 Olympic Games in Beijing, China, in the duet and team events, where she placed fifth in both. Shortly thereafter, she retired from elite and went on to pursue a career with the Cirque du Soleil and the show ‘O’ in Las Vegas. With the introduction of mixed duets at the world championships in 2015, Jones came out of competitive retirement to be May’s partner in the technical event.

What have you been up to since the 2015 FINA World Championships, and how did you reach the decision of not continuing with the mixed duet?

Since 2015, I have traveled a bunch and have continued to perform for Cirque du Soleil’s production “O” at the Bellagio on the Las Vegas Strip. On top of doing 10 shows a week, I have also put my Journalism and Media Studies degree to use by being the Olympic Analyst for the Las Vegas NBC affiliate. Also, a brand new exclusive YouTube series called “Cirque Stories” was recently launched. I will be hosting and producing this series, and each episode will highlight an artists’ journey to the circus.

Lastly, I am engaged! My fiancé Pierre and I will get married later this year.

Training for synchronized swimming on an elite level is unimaginably intense and time consuming. Although I obviously have no regrets at all, it was super challenging juggling a full time job while training for worlds. I have no idea how Kristina Lum Underwood managed shows at Le Reve with two kids ,and one was a newborn! I have no idea how Bill and Kanako [Spendlove] are able to maintain this level of training and full time employment for so long, but they are my heroes!

While I am so incredibly grateful for the opportunity to swim by Bill’s side in Kazan at such a historical event, I was ready to return back to the life I have built in Las Vegas. I was ready to throw myself into new passions and projects. I can honestly say that I can’t imagine a better way to have ended this chapter of my life. I will always remember this experience as the highlight of my synchro career.

Can you talk about your experience in Kazan? Coming out of competitive retirement, becoming a world champion and winning a medal for the U.S., a feat that hadn’t been done in years. How did it feel to be the very first world champion in this new event?

I honestly still have a hard time wrapping my mind around that! It’s a moment I will never forget. Being able to share such a historical moment with one of my best friends, Bill May, is a life highlight. Bill deserves this more than anyone deserves anything. He is a fighter, and his tireless efforts to push the mixed duet event were finally rewarded. I’m tearing up just thinking about it… 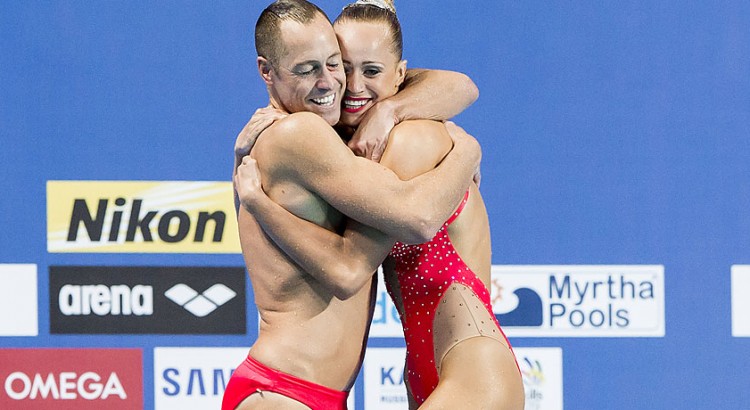 How was it working with Bill and [coach] Chris Carver ahead of Kazan?

Bill, Chris and Kristina have spent years and years creating the mixed duet vision, and I was so honored to be a part of their team. I loved learning a whole new side of our sport! Swimming with a man is much different than swimming with another woman, and I feel blessed to have had the guidance those three provided me. Together, they have so much knowledge and experience and they graciously helped me learn how to swim with a man.

Did Chris Carver come up with the choreography, or was it a collaboration between all three of you?

Chris is always the mastermind. She is a musical genius, and knows exactly what a routine needs. I loved working with her because she would have us show her our ideas and we would try everything until we got it just right. She’s always open to collaboration and suggestions, but she knows which option to pick. Not only is she a brilliant choreographer and coach, she’s an inspiring leader. She evokes something out of her swimmers that is beyond synchronized swimming. 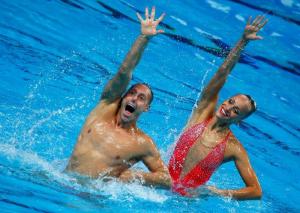 How was your choreography received at the time?

Since the mixed duet is such a new event on the world scene, I think people didn’t really know what to look for or what to expect in Kazan. This is what made it so exciting! A mixed duet should be swum as a man and a woman, much like ice dancing. The unique difficulty in a mixed duet lies in the intricacy of connections and the ability to cover the pool while maintaining these seamless connections. Mixed duets feature power, the stunning contrast of masculinity and femininity, and dynamic lifts and acrobatics.

What do you think of the new U.S. pair of May and Kanako Spendlove?

Bill and Kanako are absolutely stunning together. Their athleticism mixed with their unrivaled flexibility and ability to perform is incredible. I have loved watching them grow as a pair, and think both of their routines are stellar. Chris Carver is a genius, and she created the mixed duet event. The intricacy of their connections and their ability to move through the water and cover the pool while staying connected is simply amazing.

How did you take the news that mixed duets weren’t (for now) approved for Tokyo? What do you think needs to be done to continue pushing for the event to be added?

I was shocked. I don’t understand why the mixed duet wasn’t added to the Tokyo Olympics. From what I understand, women can compete in every Olympic event, and there are only two events that men aren’t allowed in: synchronized swimming and rhythmic gymnastics. With so much focus on mixed events and gender equality, I don’t understand how this event wasn’t added. It is unfair to exclude the males in our sport who have tirelessly trained and worked to push the limits. I think people need to be educated about the athleticism, difficulty and beauty the mixed duet event offers. In my opinion, our sport needs this event to evolve and grow.

Watch the gold-winning performance from Jones and May in Kazan here.

Article and interview by Christina Marmet.

This interview was originally conducted in July, a few days before the start of the world championships.