Anastasiya and Daria Bayandina, former members of the Russian national team, have been training alongside the French national team at the INSEP (the National Institute of Sport, Expertise, and Performance) center near Paris for over three months. They are on track to eventually join the team and represent France internationally. 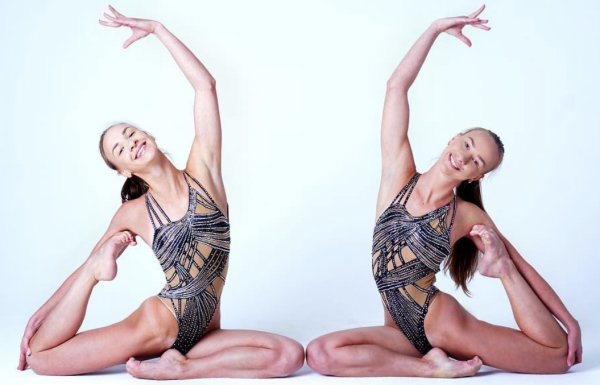 They were also part of Russia’s training squad for the 2016 Olympic Games, but did not make the final cut for the Olympic team. More recently, the two 22-year-olds were not selected for the 2019 Russian national team, which in turn drastically reduced their likelihood of going to the Olympics for the second quadrennium in a row.

On June 2, 2019, the French federation published a photo on its Facebook page of the twins in full national team apparel amongst the rest of the French athletes who were not at the Spanish Open. The caption read: “Busy weekend for the French national team with an exhibition gala and an autograph signing session.”

Sylvie Neuville, technical director for artistic swimming at the French Federation, first received an e-mail from the twins at the end of last year. Anastasiya and Daria Bayandina then traveled to France in January for a trial period, and settled in full-time at the INSEP at the end of March. They now share training sessions with the French team,  but cannot swim internationally for the country until the appropriate paperworks are through.

“What’s interesting for us at the moment is to have them with us at the INSEP on a daily basis,” Neuville said. “These are talented swimmers who really want to collaborate with us. Every day, they share tips with the national team on technique, spins, highlights or choreography. It is very enriching and beneficial for us, the swimmers as well as the coaches, to have athletes with such strong technical abilities. It’s inspiring for the French athletes.”

France was not the only country they contacted. After Inside Synchro reached out to six national federations, four have confirmed that they received letters as well at the end of 2018 from the pair seeking to join their teams, including Andrea Fuentes in the U.S. and other officials in Hungary, Serbia, and Spain. These federations turned them down.

In Hungary, the former president of the federation Balogh Sándor was actually heavily criticized for initially approving of taking Russian swimmers in (alongside another Russian athlete we hadn’t heard of in a little while), an idea which eventually fell through due to disapprobation of the board and the clubs around the country. In the end, it was amongst one of the causes of his resignation.

The Bayandina twins will first need to obtain French citizenship, via residency and by decree, before representing the country internationally. Additionally, per FINA’s Regulations, they also must have resided in the country for at least 12 months, and have swam as part of a local club in regional and/or national competitions.

They already competed during the weekend of June 8 – 9 in the technical and free duet events in a regional competition (N3 Ile-de-France) representing the club France Natation, a club affiliated with the federation. They received 88.8667 in free, and 89,5652 in tech. They will compete again at the French Senior National Championships in Strasbourg from June 28 – 30.

In the long term and once the required paperwork is settled, Neuville said the goal is to eventually integrate them into the team routines.

As for the Olympics, the International Olympic Committee (IOC) established a temporary condition that a period of at least three years must have elapsed since the athlete’s last participation on behalf of his/her former country. However, the IOC allows the relative National Olympic Committees (NOCs) and International Federation (IF) to agree amongst themselves to reduce this three-year period, or even cancel it when waived by the country of origin. The ultimate approval from the IOC is required.

Further information on citizenship changes regarding French, FINA and the IOC’s laws and regulations, as well as a general discussion on the meaning and morals of nationality swapping in sports are available here.

Finally, elite synchronized swimmers in Russia are typically professional athletes and thus receive an income, while the French national team does not work for a pay check. Neuville stated the two do not receive a salary, but that the federation bears the cost of their living fees at the INSEP.