What to Expect From the New Scoring System?

The artistic swimming scoring system is about to get a significant makeover. Through four online sessions in March, the FINA Innovation Group presented the three major components in this new system: scoring synchronization, and establishing a degree of difficulty in acrobatics and hybrids.

Overall, the Innovation Group aimed to create an athlete-focused scoring system and with a clear difficulty path, where athletes and coaches could make strategic decisions about their program composition. Moreover, the group also wanted to push towards well-balanced routines with a set number of elements, so that they could be compared directly.

The difficulty score of each routine will be calculated using assigned mathematical values and formulas. Each hybrid and acrobatic movement will receive a Degree of Difficulty (DD) value. As a result, it will allow for more objective and detailed measurements of performances.

“We don’t want to lose our artistic part of course,” said Maria José Bilbao, Chair of the Innovation Group, during one of the webinars. “This is an art too. But by increasing objectivity in many areas, it will make it easier for everybody.”

With the sport continuing to gain in complexity and speed, this new scoring system will lead to more specialization of the judges. Tasks will be divided more finitely among them. Technology will also be introduced, particularly to score synchronization errors. These will now be fully separated from the Execution panel.

While Execution and Artistic Impression judges will remain, “Technical Controllers” will be a new component of the judging panel. Controllers will encompass Difficulty judges on one hand, specifically trained to check the DD of a routine, and synchronization (or Accuracy) judges on the other.

Each routine score will be obtained using this formula: 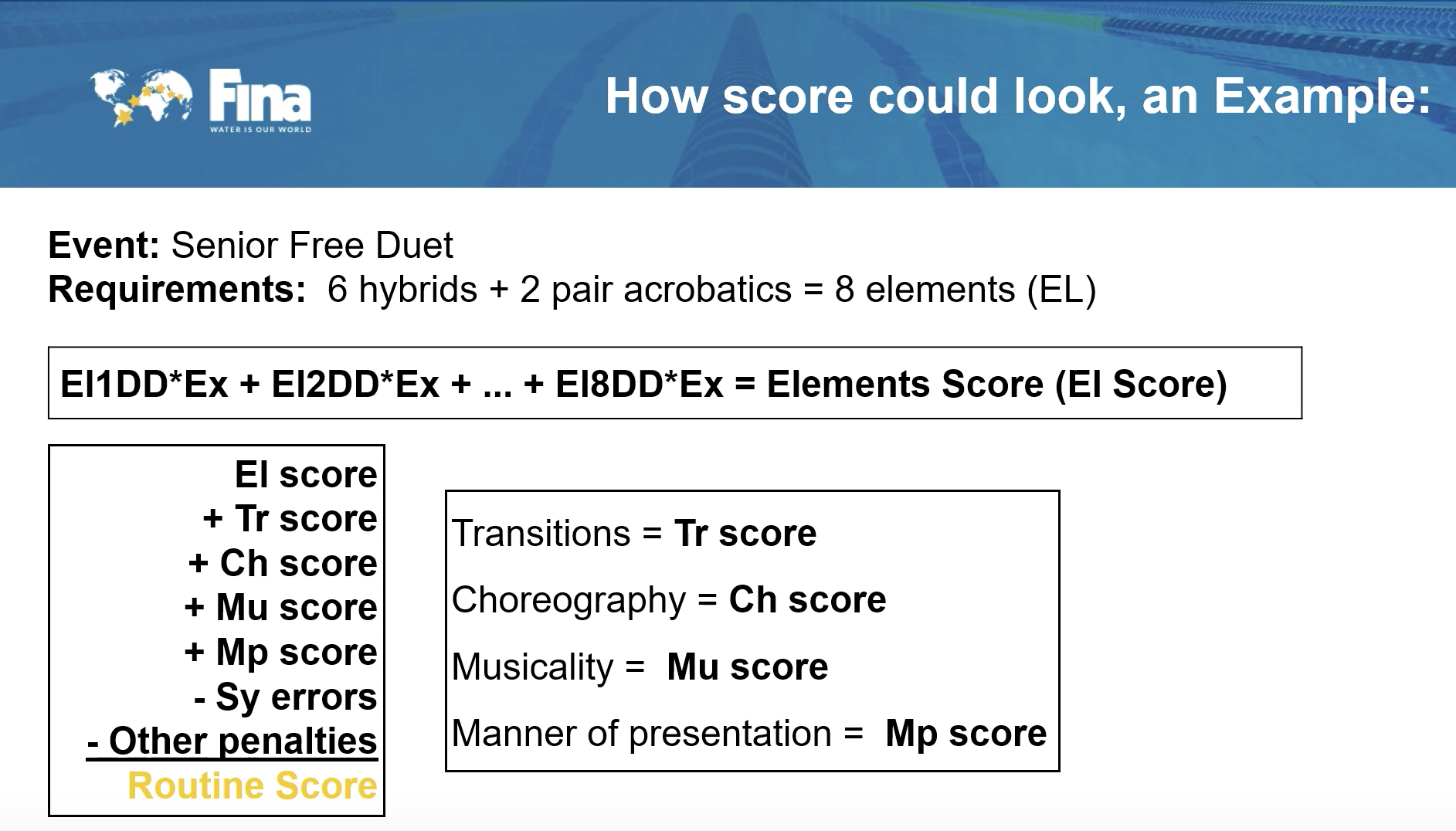 A Degree of Difficulty (DD) will be calculated for each required element (hybrids or acrobatics). Very much like in figure skating, each team will need to submit its intended elements with each DDs before the competition.

During the swim, the Difficulty judges (/controllers) will check to make sure the declared DD matches what is performed. Combined with the Execution score, each routine will receive a global Elements Score (El).

Artistic Impression judges will look at transitions, choreography, musicality and manner of presentation, much like what is currently the case. Finally, the now-computerized synchronization errors, and other penalties (overtime, touching the bottom, etc.) will be deducted before obtaining the final routine score.

The Innovation Group chose to redefine synchronization, and to instead talk about unequal action, or accuracy errors: “Any movement performed by two or more swimmers that shows inaccuracies in time or any design (spatial positioning of the body parts), out of those movements choreographed as intentioned unequal movements.”

As mentioned, technology will play a major role in this new component. Testing is currently done with an app on mobile and tablet. The Innovation Group ultimately hopes to develop a device (as shown below) where the Accuracy controllers can have a clear feel of the buttons without ever looking down. 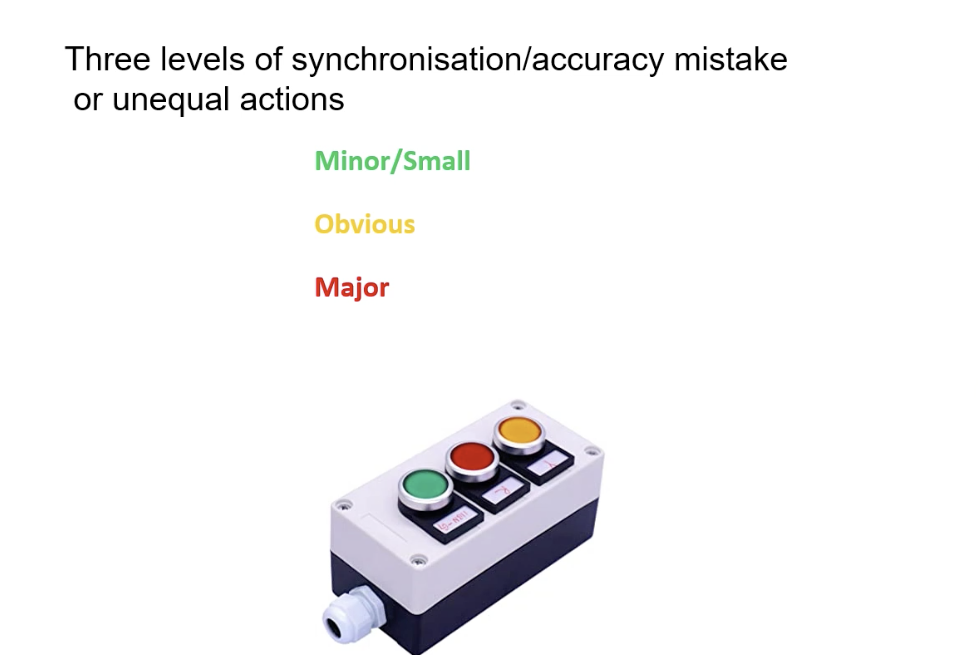 At least three controllers will be assigned to this panel. Each time one presses a button, specific data will be sent to a computer program. The data collected includes which judge pressed any button, what level of mistake it was, and the time of each.

For an accuracy mistake to be validated, at least two controllers must coincide and within a delay of 0.5 seconds. When two controllers make a coincident observation but with a different level, the less punitive is validated. When a “major” mistake is involved, the referee will need to review the video to validate it, no matter if there is an incidence between the controllers or not.

Synchronization, or accuracy mistakes, will now be fully separated from the Execution panel. As a result, these will have a lot more weight in the final scores and rankings.

Acrobatics have over the years become a prominent feature in artistic swimming routines. Nations like Ukraine, Spain or Russia, have pushed the sport forward in this area. But the level of difficulty, complexity and uniqueness in acrobatics has increased so significantly that it has become necessary to properly rate and reward them.

The Degree of Difficulty of each will be calculated as such:

Each main group has a Base Mark score. If a team declares a certain DD, for example for two somersaults but only does one in competition, it will receive the Base Mark score of the group. If an acrobatic movement completely fails, it will result in a zero.

Teams will need to submit an Acrobatic Sheet with each listed acrobatics and their DDs in order of appearance. It will later be checked by a Difficulty judge during the routine. An online calculator will be available to help coaches fill in their sheets.

With this, the Highlight event will also be majorly revamped. The Difficulty score will only be obtained through acrobatics. Each team must perform five acrobatic movements in its routines, including one from each category (A, B, C and P), and one free choice.

“It looks like you will lose creativity but no,” said Andrea Fuentes, head coach of the U.S. team. “As a coach now if I have to do one of each, my creativity is limitless, and I also have a guide at the same time. I can still invent another completely different thing with this fifth option of freestyle. It’s good because it makes the swimmers do all kinds of lifts.”

A full PDF document is available online detailing the different groups and subgroups, and including many graphics and video examples.

The last and probably most complex change relates to hybrids. Every hybrid will also have its own Degree of Difficulty. Just like for acrobatics, coaches will need to declare the intended DDs in advance, and the Difficulty judges (/controllers) will check these during the competition. Each routine within the same event will have an equal and mandatory amount of hybrids, but that amount will vary by age groups.

Each hybrid’s DD will be considered under two areas: the Movements themselves, and the Bonuses.

Movements compose all transitions in a hybrid, and are grouped in six different categories: Rotations, Thrusts, Flexibility, Angles, Height, and Connection. Each of these has different levels of difficulty within

For example, the Rotations group has eight levels of difficulty. Level One includes a simple descending spin 180° with one or two legs up, while Level Eight features Combined Spins 1440° with two legs only. In the Thrusts section with its seven levels of difficulty, the last one is basically the “Virginie Thrust,” where the Barracuda is caught and sustained in a vertical position.

The Bonus area will encompass number of movements in a single hybrid, underwater time (the longer the hybrid, the bigger the bonus), speed (automatically calculated from the ratio of number of movements/time underwater), placement (when in the routine does this hybrid happen), synchronization (whether all athletes are meant to perform the same movement at the same time), and pattern change (simple or complex).

An introductory guide for the use of difficulty charts is also available here. It gives out detailed examples of each level of difficulty in each Movements group, and explains the Bonuses in depth.

Coaches will also use a calculator to determine the DD of each hybrid. Any difference between the declared and observed DD in competition will reduce the hybrid value to its Base Mark. That will be automatically calculated at the same time as the DD, using a formula so the level of the different movements included in the hybrid are balanced.

The Base Mark is essentially the difficulty that remains in the hybrid even when mistakes made it hard to determine it. Basically, what is the difficulty of something you intended to do but could not? That is your Base Mark.

All replays of the four presentations (in English) are available on FINA’s Learning Platform. This new system is still in its testing phase, and will likely be fine-tuned and modified as testing progresses.

This new scoring system is expected to be voted on at the 2022 FINA World Championships if testing is satisfactory. If approved, it will be implemented for the 2023 season.