The second edition of the European Youth Championships wrapped up over the weekend in Montceau-les-Mines, France. The competition gathered the European up-and-coming talents from the 13-15 age group and 19 countries.

France absolutely dominated the entire meet by winning five golds (figures, women solo, men solo, duet, mixed duet), two silvers (team, highlight) and a bronze (figures). The final day of the meet was particularly successful for the hosts as they swept every event on the programme.

Phenom Laelys Alavez, reigning European Youth silver medalist, was undeniable at this competition as she became three-time European champion in figures, solo, and duet. Her lead in the solo event was particularly impressive as she won with a margin of 5.6287 points over silver medalist Ginevra Marchetti.

Alavez has dominated on the domestic scene over the last few years, and continues to live up to her potential internationally. With the World Youth Championships in a few weeks, she’s certainly one to watch in the race for the title.

Alavez was again paired with Prune Tapie in the duet. The two had missed out on the podium last year, but this time grabbed gold with a lead of 2.9705 and a combined score of 166.7575. Tapie also finished third in figures, which gave the two the top figure scores of all duets, 82.5242.

Lucas Valliccioni, reigning champion in mixed duet, became the first European Youth Champion in the men solo event for this age group. Valliccioni, who had already swam this season at the French Open in this event, scored 154.5837 with his “Arsene Lupin” routine. He was also ranked first in figures amongst the men, giving himself a solid lead of nearly three points over his competitors before the solo final.

Moreover, he successfully defended his title in the mixed duet, albeit with a different partner this time. He and Lou Thuillier, who notably finished fourth in figures, won with a combined score of 158.7646.

In team, the French won silver with a score of 162.3150, swimming to a version of the “Insect” choreography that the senior squad used in 2009-2010. Similarly, the nation used the 2019 “Cancan” senior highlight routine to win silver with 82.0667. Valliccioni also swam in the routine and earned his third medal of the competition.

Spain won the team event with a total score of 162.9491. The nation used the “Avatar” routine that was swam by the junior squad over the last few years.

13-year old Eneko Sanchez made his international debut in the men’s solo and mixed duet events. The youngest of the field in both events, he won bronze in the latter, swimming with Daniela Suarez to the nation’s former senior routine set to Evanescence’s “Bring Me to Life”. He finished fourth in solo with a routine set to a violin composition, and overall looked like he was having the time of his life in the water.

In the women’s solo and duet, Spain was barely edged out of the silver medal position by Italy, its penultimate rival in Europe and across all age groups these last few years.

In solo, Spain’s Carla Lorenzo grabbed bronze with a routine set to the French song “Voila”, performed by Barbara Pravi at the Eurovision song contest. Despite finishing ahead of Italy’s Ginevra Marchetti in figures, Lorenzo finished right behind her in the combined rankings by 0.1214. Marchetti, swimming to the soundtrack of “The Mission” by Ennio Morricone, scored 0.800 points ahead in the routine event, just enough to secure the silver.

The margin between both duets was even smaller, even though Spain strategized as best as it could. Indeed, the Spanish duet changed between the preliminary and final events to boost the figures score and to inch closer to Italy. Xenia de la Puente replaced Marina Sarmiento, but it ultimately wasn’t enough as the nation missed out on the silver by a tiny margin of 0.0098 points!

Like in the senior and junior categories, Italy was again the sole nation entered across all events, and medaled in every one of them. Most notably, the Italians became European Youth Champions in free combination, and defended their title in highlight.

Filippo Pelati, already a European medalist in the junior category, secured the silver in both solo and mixed duet here. Israel’s Yogev Dagan is another fellow junior competitor, and won bronze in the men’s solo in Montceau-les-Mines. he aalso swam as part of the team and free combination routines.

Overall, it was fantastic to see nations continue to include boys in their team routines. In addition to the three previously mentioned, Maxwell Sewell swam in the free combination as well as the mixed duet for Great Britain. This was his second participation in the European Youth Championships.

Greece won bronze in the free combination event with its “Africa” routine and a score of 80.3667. In highlight, Croatia grabbed bronze behind Italy and France, and a score of 74.0000. 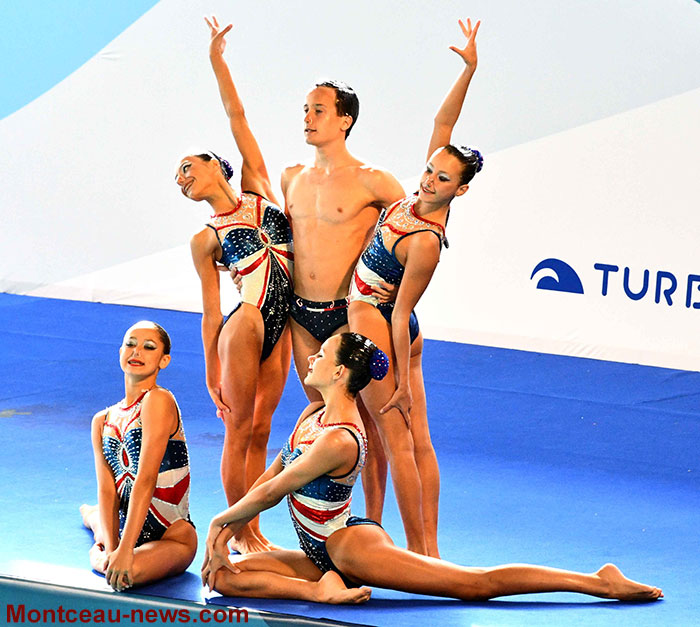 A few other noteworthy performances came from Switzerland, Croatia, Malta, and Turkey. The Swiss Melody Halbeisen and Aimee Michel were quite thrilling to watch in duet with their “Killer Dolls” routine. Both fully got into character and displayed great presence and confidence in the water. Similarly, Halbeisen showed great maturity in solo with a routine set to “Je te Pardonne” by Maitre Gims and Sia. She only finished 0.4352 points behind Greece’s soloist in combined score.

With a fantastic result in figures, Croatia’s soloist Mia Piri made her way into the top six in the event. Swimming to “She Used to Be Mine” by Sara Bareilles, she finished sixth in the final with a total of 153.4398. Her routine score of 76.7000  was also the sixth-best score of the event. With this showing at her first major international event, she is certainly one to watch over the next few years for the nation.

Similarly, Malta’s Zea Montfort and Emily Ruggier had an outstanding figures competition, which moved them up to the finals in solo and duet. After finishing 13th in routine alone and 10th in combined scores after the solo preliminary, Montfort ultimately ranked eighth in the final, an incredible achievement for her and the small island nation. She and Ruggier ultimately ranked 11th in the duet.

Like Spain, Turkey switched swimmers between the duet preliminary and final, and boosted its figures score by nearly two points. The strategy paid off as Ece Ungor and Esmanur Yirmibes climbed two spots in the final and finished seventh. These were Ungor’s second European Youth Championships, but the 15-year-old has also been competing on the senior international stage this year.

It was fantastic to see Poland for the first time in an international competition this season. Michalina Gnacek, 13, was particularly impressive in solo, swimming to “Forbidden Love” from the Romeo & Juliet movie soundtrack. She finished 10th with a total of ​​148.2189. She only started artistic swimming in 2019, and is another young talent to keep an eye on.

It was also encouraging to see Georgia’s new generation, with the young duet of Tekla Gogilidze and Nita Natobadze, 13 and 12 years old respectively. Natobadze was actually the youngest competitor of the entire competition, being born in late December 2009. The two missed the final by only a few tenths but were thrilled when they saw their routine score of 72.2333.

Finally and like every other major international event this year, Russia and Belarus did not participate. Unfortunately and understandably so, Ukraine was also missing from the field.