Italy’s Return To The Olympics Leads To Best Finish Ever

Following the 2004 Olympics, Italy had only been represented at the Olympic Games in the duet category. In Athens, the team and duet both finished seventh. With the qualification rules changing for the 2008 Olympics, it became difficult for Italy to make it as a team as some of the spots were now automatically reserved to others for continental representation. Led by a strong roster of veterans, the team qualified unexpectedly at the 2016 Test Event by passing Spain for the final Olympic spot, and thus continued its momentum towards the top of the rankings.

For the last few quadrenniums, Italy has always hung around the sixth or seventh place in the world hierarchy, and has regularly been a medal contender in European competitions. The nation has not only won numerous European medals in the past, but it has also known success on the world stage with Beatrice Adelizzi winning the bronze and first ever world medal in the free solo at the 2009 World Championships in Rome. Italy also recently encountered even more success when its mixed duet won two bronze medals in the technical and free events at the 2015 World Championships in Kazan, Russia.

Taking advantage of Spain’s struggles, Italy shocked everybody at the test event by all of the sudden becoming a real Olympic qualifier contender. Just a few months before at 2015 Worlds, Italy was still behind Canada and Spain in technical team, and one point behind Spain in the free team event. Its scores have been slowly but steadily increasing over the last few years, but seeing the country qualify to the Olympics was quite a surprise for everyone. It was exciting to witness it all happen so quickly especially in a sport where such upsets rarely happen. Italy was back at the Olympics as a team for the first time in 12 years.

The current national team roster is loaded with talent and experienced swimmers, which undoubtedly helped when the pressure was on at the test event. Out of the nine swimmers who were in Rio, six of them have been on the senior national team since 2010 or earlier. Manila Flamini and Sara Sgarzi have actually been around since 2005, and Mariangela Perrupato and Elisa Bozzo since 2006. Costanza Ferro was the “baby” of the team, but still had a tremendous international resume of her own, making her big senior debut at the 2013 World Championships after being one of the most prominent junior swimmers in the years before.

Led by veterans aiming to bring their team back to the Olympics, the Italians kept innovating and presenting unique routines throughout the years from their current artistic director and three-time Olympian Giovanna Burlando, along with some more inputs from Russian Olympians Gana Maximova and Anastasia Ermakova.

The free team routine they presented in Rio was the same as in 2015, and thus had enough time to be modified when needed and perfected down to the smallest details. It was originally created by Anastasia Ermakova, and it is very soft and artistic with the opening sequence a big fan favorite. However, each of their national teams (13-15, junior and senior) ended up swimming it this season, so it did become repetitive for people like me who of course watch every single meet and every single routine. In Rio, the free team scored 92.2667.

Their technical routine was a completely different style as it was set to a remix of dubstep music and was a bit more aggressive, faster and louder. They had already introduced that routine at the test event back in March. This kind of music is personally not my favorite, but the routine in itself got the job done back then, and got the job done again in Rio. They scored a big 91.1142, while they were ‘only’ at 88.9053 a few months before at the European Championships!

The Italians concluded the team competition with a combined score of 183.3809 and ended in fifth place, their best finish ever at an Olympic Game. 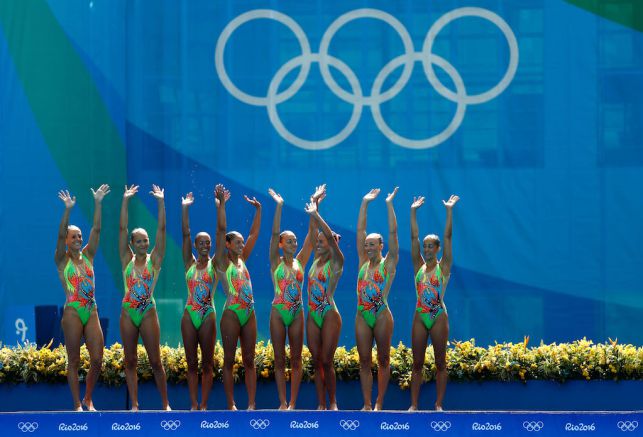 In the duet competition, Linda Cerruti and Costanza Ferro placed sixth with their free duet also set to a dubstep mix of Eurythmics’ “Sweet Dreams,” which they have had since 2015. They definitely won me over with their technical program mostly for the drop-dead gorgeous swimsuits they unveiled (see below). That routine, like the free, was choreographed by Gana Maximova and already presented earlier in the year at the test event and at Euros.

With a combined score of 182.8079, the pair finished in sixth place and matched Italy’s previous best finish from the 2000 Olympics. Cerruti and Ferro have been swimming together for decades, and it was very sweet to see them achieve their goals together on the biggest stage of this sport.

It will be interesting to see what happens now and how big of an overhaul the team will face since many swimmers have been around for so long and they may want to retire (I believe Sara Sgarzi is retiring). Only time will tell, but Italy has no reasons to worry as its junior and 13-15 teams are loaded with talent and have always been successful in international competitions.

Now settled into the third European spot right behind Russia and Ukraine, and after winning a record nine medals (three silver, six bronze) at the 2016 European Championships, the Italians will look to keep medalling on that stage, and hopefully cause some more upsets on the world stage very soon.