If you’ve watched the Olympics, you know how crazy the crowd went for all the Brazilian athletes. Synchro was no exception, and the pool felt like a soccer stadium before and after each of the team’s swims. While never in contention for an Olympic medal, the Brazilian swimmers undoubtedly took the whole experience in while making history for their country as the first ever team to qualify to an Olympic Games in synchronized swimming.

Since the new qualification rules originally put in place for the 2008 Olympics, the host nation has always been guaranteed a spot in both the team and duet event. Knowing that they already had their spot secured for 2016, the Brazilians focused on increasing the technical difficulty and on developing routines that would be sure to put on a show this summer.

In order to do that, the team got a big boost with the arrival of Julie Sauvé, who was the head coach of Canada for over 30 years. Sauvé had announced her retirement after the 2012 Olympics, but quickly un-retired and went to Brazil to help choreograph some new routines for them. Sauvé was the team’s consultant until the end of 2015 where she helped choreograph the routines presented in Rio, along with the main technical director Maura Xavier.

The Brazilian team did not present any new team routines at the Olympics, as both the tech and the free had already been previously introduced at the 2015 World Championships in Kazan, Russia. They had however improved both of them and increased the difficulty for the Games. The technical team chose the theme of bikers and used well-known popular songs like “Black Betty” by Ram Jam. 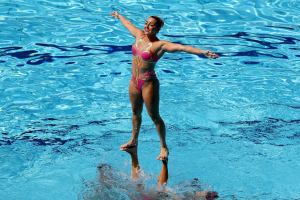 The ‘Carnival’ free routine was of course a huge crowd pleaser, as the girls used Brazilian music and drums while highlighting some of the country’s landmarks, like mimicking Christ the Redeemer on a feet-to-feet lift. That routine was really fun to watch and I am sure to perform as well, and you really can’t help but smile and cheer along with the crowd. There was no better choice of a theme for a first-ever appearance at the Olympics at home.

The judges appeared to have liked it as well, as they gave the Brazilians a big score of 87.2000, which was two points more than in Kazan only the year before. Obviously, the swimmers were thrilled, as pictured below.

There wasn’t any surprises in Brazil’s sixth place finish, as it had no realistic chance of passing Italy or getting passed by Egypt. This probably took a bit of pressure off the swimmers’ shoulders in that regard, but it is certain they still were aiming to have great performances and to put out their best in front of their home crowd.

In an interview, Maria Bruno relished the experience and was thrilled to swim in front of the Brazilian public:

“It was very good, I have no words. We could feel the energy of the crowd, which is something we never had before, so it was very exciting. Instead of being at 100%, we were at 200% because of it. We swam very well and our score was much higher than we’ve ever had with this choreography in other competitions.”

Brazil followed a similar strategy in the duet by not presenting any new routines, but rather perfecting the ones it already showed in 2015. The Brazilians have been the perennial 13th-place finishers at the Olympics for quite a while now. At the 2008, 2012 and sadly also this year in 2016, the duet has always been one spot away from making finals.

The technical duet also presented a very Brazilian theme sure to be a hit with the local crowd: the capoeira. Luisa Borges and Maria ‘Duda’ Miccuci had a good swim and scored a 83.3008, under the applause of hundreds of fans thrilled to see a part of their culture displayed in the pool.

The free duet had the theme of “Amazon,” with a music filled of jungle-y sounds like snakes hissing or monkeys screaming which was… interesting to hear.  I guess it stayed within the theme, so there’s that. You can get an idea of the music by watching their performance in Kazan. The pair scored 84.0333 for a combined result of  167.3341 that landed them in the 13th position yet again and out of the finals.

Brazil now already faces an overhaul with the retirements of some of their veterans like the Feres twins, Bia and Branca, and 2-time Olympian Lara Teixeira. Fortunately, they have already started thinking ahead by training the next generation and by giving the opportunity to a few of the younger swimmers to swim in Rio like Duda Miccuci (21), Luisa Borges (20) and Maria Clara Lobo (18). The Brazilian Federation also hopes that this new exposure at the Olympics will attract new swimmers and help the sport grow in the country.