The 2016 Olympics marked the first time in Ukraine’s history that the country qualified a full team to the Games. They almost made it in 2012 but were relegated to fourth place at the test event behind Japan by 0.2 points and thus missed out on the final spot to the London Olympics. Over the next quadrennium, Ukraine came back with a vengeance and had no intention of losing its team spot for the Olympics ever again.

Ukraine has shown a spectacular rise in the synchronized swimming ranks over the last few years. They started out with very Russian-like routines, using classical music, focusing more on technical difficult, clean and sharp execution and very powerful throws.

From then on, the Ukrainian team has kept improving and has continued winning medals on the European and World stages. In 2014 at the European Championships, the country showed up with seven brand new routines, which is an incredible feat in this day and age where many nations choose to only renew one routine at a time and keep them for a few years. That strategy paid off, as Ukraine won medals in all categories and passed Spain for the first time ever in the duet, team, and free combination events.

On the world stage, the fight with Japan for that coveted third place has never really stopped. At the 2015 World Championships, the two teams were neck and neck in all events. Ukraine grabbed one bronze in the free duet event while it was passed by Japan in all other categories by the tiniest margins. At the 2016 test event in Rio, Ukraine qualified to the Olympics for the first time in the country’s history and in first place ahead of Japan.

The Ukrainian team has been working with former Spanish technical director Anna Tarrés since 2015, and it has slowly unveiled brand new routines over these last two years. Tarrés’ innovative choreography paired with the Ukrainian school of training has been interesting and exciting to witness. 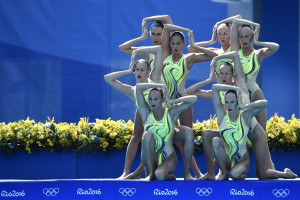 The team first got out of its comfort zone at the test event in 2016 when it presented a new technical program (that they also swam in Rio) to the deep house/techno track “Tsunami” from DVBBS & Borgeous. That routine was faster, a little more aggressive and upbeat as well as a little more out of the ordinary from what we were used to seeing from this team that again relied heavily on “traditional” music pieces in the past.

The team showed a brand new free routine in Rio created by Anna Tarrés on the theme of illusion. It was a very Tarrés-like routine, with never-seen before lifts and moves, and original choreography.  Everything worked perfectly with the theme, and the creativity in the routine was very well received and appreciated by fans around the world. It is always refreshing to see countries come up with interesting and unique moves, and teams must innovate to move up the rankings and most importantly to stay at the top. The attention to details was even down to the swimsuits, which were specially designed so that they became darker when the swimmers hit the water! 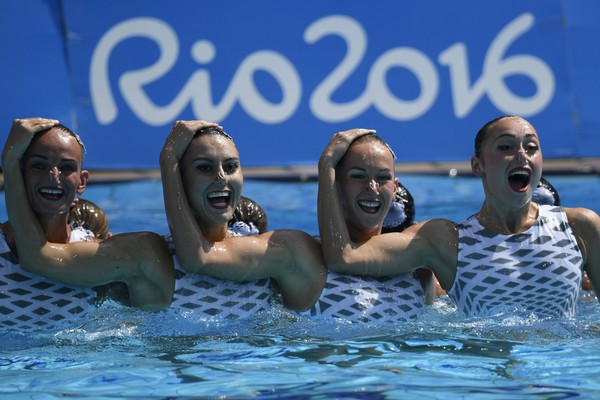 That routine still does need to be cleaned up a little bit, as there were some synchro mistakes and it was overall less sharp than Japan’s, and it is probably where the difference for the bronze happened. That said, we can expect Ukraine to have a much cleaner swim next year at the 2017 World Championships and be right in the hunt again for medals, assuming it keeps the same routine.

In the duet event, Lolita Ananasova and Anna Voloshyna presented a new technical program. It highlighted the swimmers’ culture with traditional Ukrainian music while the suits and headpieces recalled the national attire.

The free duet, already presented at the 2015 European Cup, was more emotional and swam to some of the music from the movie “Romeo & Juliet.” The routine really showed the swimmers’ dramatic abilities and charisma in the water (both are incredible soloists). The pair placed fourth in finals with a free score of 94.000 and a combined score of 187.1358. Ukraine has been qualifying a duet to the Olympics since 2000, but this fourth place is also the best finish ever for the country in this category.

Ukraine’s fast rise to the top has brought a lot of excitement to synchronized swimming over the last few years, and it is so great to see new nations moving up through the hierarchy and winning medals on the international scene. While they probably were a little disappointed to come so close to the Olympic podium, they should be so proud of these historical finishes in Rio and all the improvements they have made recently. Coming so close can only fuel them to keep training and innovating to come to Tokyo in 2020 as medal contenders once again. 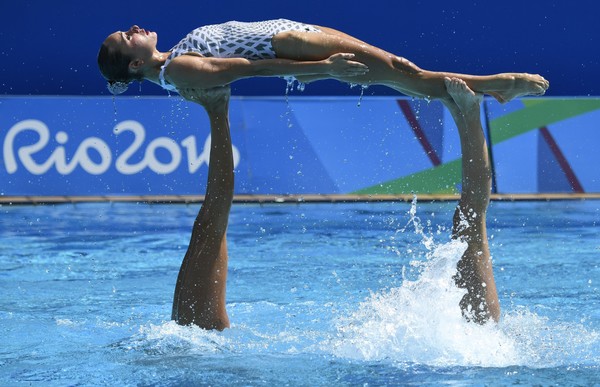