The International Swimming Federation (FINA) has cancelled the diving, artistic swimming, and open water Olympic Qualification Tournaments in Japan, scheduled for the coming weeks. It will work on finding alternative locations and/or dates for each event.

The FINA Diving World Cup was the first to be officially cancelled because of poor COVID-19 precautions. In a letter seen by Inside Synchro, the governing body deemed that the organizers’ protocols would “not properly ensure” athletes’ safety.

All diving International Federations received the news on April 1 announcing the cancellation of the Tokyo event, meant as the final Olympic qualifier in the discipline. FINA took this decision shortly after the Japanese Swimming Federation communicated its planned COVID-19 protocols for the event.

When asked for an official statement on April 2, FINA replied: “The decision of re-allocating the FINA Olympic Qualifiers planned in Japan is under review. An announcement will be made next week.” 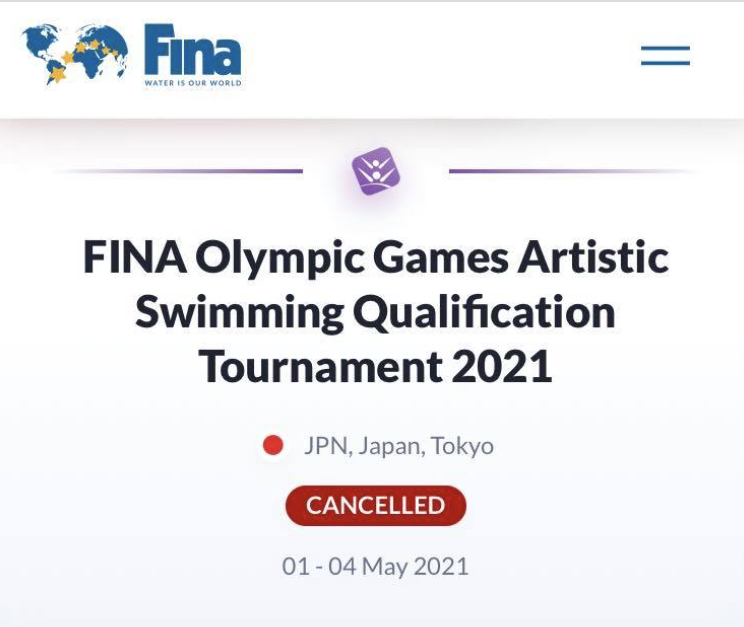 On April 3, it updated its website to reflect the cancellation of all three Olympic Qualification Tournaments and to pull them out of Japan.

In the diving letter, FINA’s Interim Executive Director Marcela Saxlund listed the reasons that motivated the Executive to make this drastic decision:

“1. A very negative opinion from FINA’s Task Force on the COVID-19 plan sent by Tokyo. In their view, this plan will not properly ensure health and protection guarantees to participants;

2. A new communication from Tokyo requesting FINA responsibility for the additional costs related with the implementation of COVID-19 countermeasures;

3. Reports from National Federations that Japanese Embassies around the world are still not ready to launch the visa procedure;

4. The mandatory three-day quarantine is requiring a change of travel plans for ITOs, TDC members, and FINA staff. This has obviously some financial consequences and some withdrawals have already been communicated to FINA.”

FINA also criticized the Japanese government, which in its opinion “did not take all the necessary measures to ensure a successful and fair organisation of this competition.”

The Tokyo Diving World Cup was scheduled for April 18-23, a week before artistic swimming in the same venue. Fukuoka was the host of the final selection event for open water swimming at the end of May.

The letter concluded that the governing body would immediately take all the necessary steps to find an alternative date and location for the staging of the FINA Diving World Cup. It is safe to assume it will do the same for the artistic swimming and open water qualifiers.

Both Olympic Qualification Tournaments for water polo already took place. The women competed in January in Italy while the men faced off in February in the Netherlands.

This is the third time the artistic swimming tournament has faced major changes. It was first rescheduled for March 2021 before being postponed to May 1-4, 2021.

April 6 update: FINA has changed the status of all three qualifiers from “cancelled” to “to be confirmed” on its website.